Simple Trick To Break Bad Habits And Develop Good Ones!​ 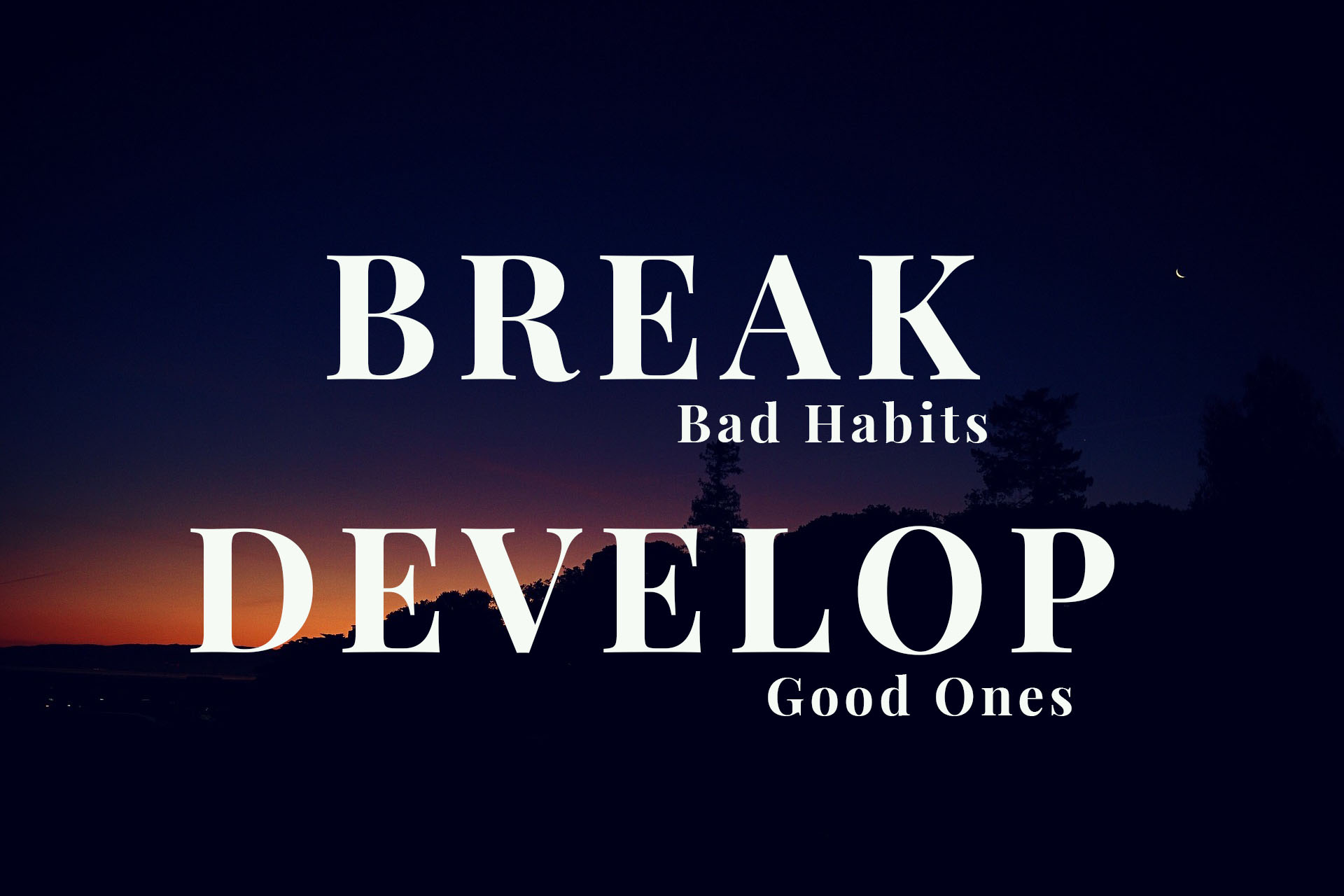 Recently, I watched Sanju, a Hindi biopic movie apparently based on the life of Indian actor Sanjay Dutt. In a monologue in the movie, there is this line by Ranbir Kapoor who is portraying Sanjay Dutt. Here let me quote that in English – “The first time I took drugs, ‘cause I was upset with dad. The second time, ‘cause my mom was sick. By the third time, I was a drug addict”

Pretty easy way to get addicted, right? In fact, there are many who get addicted to bad habits in just a couple of ‘trials’. So the above addiction seems quite reasonable, doesn’t it?

Now let’s come up with some similar Ranbir Kapoor lines but relating to a good habit, let’s say ‘Waking up early’!

“The first time I woke up early, ‘cause I had an exam. The second time, ‘cause I had to board a morning flight. By the third time, I was an early riser.”

How reasonable did this one sound? Not reasonable enough I guess. Well, we all at some point in our life have tried to develop this habit for good. Some succeeded with consistent efforts and others did not. But we would all agree that it’s definitely far more difficult than developing a bad habit which takes almost no effort.

But why this differences in efforts between these two set of habits?

Well, in simple words, it is basically due to the tendency of our brain to be in a comfort zone and seek immediate reward for whatever we do. If we do something that we haven’t done before or something that doesn’t please our brain, the brain takes it to be unimportant or treats it as a threat until it is convinced that whatever we are doing has a reward and does not harm us.

Now, for bad habits, the rewards for the brain are almost immediate. Take drug addiction for instance; someone takes drugs, he/she gets “high” and feel pleasure and his/her stress level decreases temporarily but almost immediately. And thus brain easily falls prey to this bad habit.

But when it comes to good habits, it’s not that simple and we all know it. It’s not easy to convince our brain to leave the immediate comfort of the bed for whatever good reason we are wanting to make the habit of waking up early. And this applies to almost every good habits that we tend to start for the first time. And in most cases, to develop a good habit we need to step out of our comfort zone and this becomes the difficult part as our own brain starts resisting the change!

So what do we do then?

For most of us, the approach that we are suggested basically includes ‘exercising self-control and increasing willpower’ to break bad habits or motivations to develop good ones. And it’s very rare that this actually works in long run. Self-control, willpower, motivations are no doubt important factors but they don’t help to meet the crave that is actually driving the bad habit itself. If someone has a tendency to smoke whenever he is stressed, his problem is not smoking, the actual problem is the stress that is driving him to smoke. But people put all their effort onto stopping to smoke without giving much attention to the stress. And when they are stressed, they give in to the temptations of smoking after few deliberate efforts for avoiding it.

Charles Duhigg, in his book ‘The Power of Habit’ writes about the ‘habit loop’ and many researches that have been conducted in the past on habits. However, the core concept of his book is the ‘Golden Rule of habit change’. And this concept is not just practical but with some effort, we can even replace a bad habit with a good one. Let’s see what this rule actually says:

The Golden Rule Of Habit Change

According to this concept, every habit, whether good or bad, comprises of 3 key components:

Let’s understand this with an example: There’s a guy who has just gone through a huge loss in his life which has stressed him out. Whenever he is lonely he only thinks about his loss and gets more depressed. Now to divert his mind, he downloads a game in his phone and starts playing it whenever the thoughts about his loss trouble him. So he develops this habit of reacting to ‘being lonely and stressed’ (CUE) by ‘Playing a video game’ (ROUTINE) in order to ‘avoid thoughts about his loss’ (REWARD).

Now, imagine yourself as being this guy. After about a couple of months of starting to play this game, you have realized that this is actually killing your time and productivity and that you need to get rid of this habit. What would be your approach?

Well, this is where most of us go wrong. We just try to eliminate our ‘ROUTINE’ without taking our ‘CUE’ and ‘REWARD’ into consideration. Self-control, willpower, they do help but in the long run, it mostly fails to keep us away from the bad habits that we have already formed.

In above example, we deliberately force ourselves away from the video game even though we have no substitute for what we would do for the brain’s craving whenever the ‘Cue’ of ‘’being lonely and stressed’ arrives. And this is true for almost all the bad habits that we try to change. We just want to stop doing things. Now, because bad habits or the bad routines are providing some sort of reward to our brain, even if it is having a negative impact in long run, it’s very difficult to simply eliminate them.

This is where the brilliant concept of the ‘Golden rule of habit change’ comes to our rescue. What it suggests is to keep the ‘Cue’ and the ‘Reward’ same, Just change the ‘Routine’ to something good. What this will do is, it will not only satisfy the craving for the reward but it will also give us a chance to start a good habit.

So how does this work?

Well, here is a framework that can help you break bad habits and replace it with good ones. The change might not always be easy and fast, but with time and efforts, you can reshape almost any habit.

Step 1: Identify your ‘Routine’. Make a list of all the habits that you want to break or eliminate from your life. I would suggest you write them down. It can be anything like eating junk foods, smoking, drinking, nail-biting, wasting too much time in gaming or social media, addicted to mobile phone or pornography, having a bad temper, gambling and so on. Just make the list and take some time to analyze how you got those habits in the first place. Most habits are actually formed due to stress, boredom, loneliness and bad company.

Step 2: Figure out the Cues and analyze them to understand what triggers you to carry out the habit in the first place. Make a list of all the cues that trigger your routine and write them down too. Try to be specific like; if you are given too many assignments, it stresses you out and you tend to smoke; or if you pass by a pizza store, you are tempted to eat; or when you are lonely, you dive into video gaming or social media. Write them down specifically. It is going to be tiresome in the beginning, but it will pay off eventually.

Step 3: Understand the reward: It is also very important to find why you are doing what you are doing. Figure out what is that ’Reward’ that is driving you to carry out the routine. If eating junk food satisfies your craving for food, make note of it. If after you smoke, you feel your anxiety lowering, make note of it. If you are spending too much time on social media because it makes you feel connected to the world or gives you happiness for your post and pics likes, just make a note of all this.

Step 4: Look for possible substitutes. Best way to break a bad habit is by replacing it with a good one. Find out a possible healthy replacement for your bad routine. This is the tricky part.  Don’t try replacing one bad habit with another bad habit. For example: if you smoke to lower your stress, then you can replace that with ‘Reading some good novels’. Results may not be immediate but it does serve the purpose. But again, not everyone loves reading (you should though). In that case, try replacing it with something you love, maybe a sport or a hobby that you love doing or listening to your favorite music and so on. Basically, the idea is to have an alternate ‘Routine’ for the ‘Reward’ whenever the ‘Cue’ arrives. And choosing between the options is where your ‘Willpower’ and ‘self-control’ dive in. But once you start opting for the good habit more than the bad one, the bad habit will slowly but permanently disappear.

Step 5: Make a plan. Once you have understood your bad habits and have figured out their respective CUEs, ROUTINEs, REWARDs, and the SUBSTITUTEs, you should lay out a plan on how you are going to replace old routine with the new one. This is important because we often plan to change many habits together over a short duration. We are then overwhelmed by the pressure to change and when we are unable to do it we get discouraged. Avoid such intense planning initially. The best approach would be to Start Small. Do not plan to change all habits overnight. It’s better to start with something easy and focus your energy on changing it. Once you see the change, the sense of accomplishment will boost your confidence. Then move to the next one.

Yes, the complications increase with the increase in the intensity of bad habits, but if you never start you are never going to change. And we cannot expect a better tomorrow by repeating the same bad habits every day. You must change the habits into good ones to make your life better.

In addition to the above framework, you should also consider the following to break bad habits:

Rather than being rude to yourself and criticizing yourself for this, ignore it and stick to your plan again. Everyone gets off the track once in a while, but what separates the high achievers from everyone else is how quickly they get themselves into track again! With time you will notice that the tendency of giving in to the temptations also decreases if you keep bringing yourself into the track.

I hope this article will be of some help to you. Start making efforts to change your bad habits today. The faster you start, the better it would be, because no matter how engrossed you are in the habit now, one day you will have to make changes to change your life for good. Let the day of change begin today!