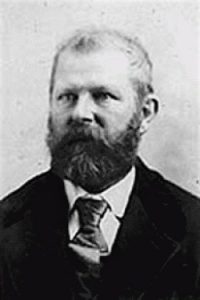 Adept in his art, Emanuel Ninger, was perhaps one of the cleverest counterfeiters the world has ever seen. The United States Secret Service which was originally formed to suppress counterfeit money was aware of Ninger’s work for more than 15 years. But they had no clue about his true identity. So the Secret Service named him ‘Jim the Penman’, the name by which he was known until his identity was finally revealed in 1896.

Ninger would buy best available quality bond papers and cut it to the exact same size as that of the note he wanted to copy. He would then soak the paper in dilute coffee solution, align the paper over a real banknote, place both on a sheet of glass and trace the resulting image. He then went on to paint the bond paper using camel’s hair brush. He even imitated the silk thread with blue and red inks. However, he would not imitate the intricate details of the note, but he was clever enough to give an impression of the intricacy to the beholder. His notes were so good that no one ever questioned their authenticity on accepting them until he committed a small mistake which finally exposed him.

In March 1896, Ninger while paying for his cigars and drink in a bar, laid one of his fake $50 note on a wet table before handing it to the bartender. The bartender noticed that ink was coming out from the note. He informed the police. Ninger was then arrested and sentenced to 6 years imprisonment.

Though his act was definitely a crime, he earned praises for his amazing work of art. He even received praise from the Secret Service, which admitted him to be the finest counterfeiter ever born! Ninger before he was sentenced, confessed to having made only 390 notes in his career. However, it was estimated that the actual number could be as high as 700. A few of those notes are still believed to be in possession of some collectors in spite of the fact that they are illegal.

A man who could have done amazing works with his talent, rather chose a path of forgery and crime. Maybe he himself did not realize that he was such a great artist and deserved a wonderful career.

But don’t worry Emanuel Ninger, we respect your art. And if for any reason, somewhere inside, you are regretting for not having used your talent for a better purpose, I would suggest you go and read my article on ‘Dealing With Regrets’, you are going to feel much better😉! (Okay, that was a bad joke I know 🙈)