The Mysterious Dancing Plague: When People Danced
Themselves To Death!​​

In July 1518, an enigmatic plague struck the medieval city of Strasbourg in France. Known as ‘The Dancing plague of 1518’, it was one of the most mysterious and terrifying incidents in human history which claimed hundreds of lives.

It all began with a woman named Frau Troffea. Sometime in mid-July 1518, she stepped out into a narrow street in Strasbourg and began dancing without any accompanied music. Her dancing vigil lasted for about four to six days in succession! But she wasn’t alone for long. Within a week, 34 other joined her and by the end of August, the dancing, hopping and leaping crowd had increased to over 400 individuals. Documents from the time suggest that at the peak period of the dancing plague, about 15 people were dying every day due to heart attacks and exhaustion! 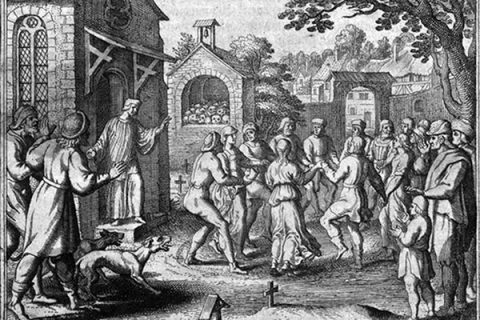 What made it worse was the local authority’s unusual approach towards bringing the situation under control. Initially religious sermons and local physicians were called to address the issue. After discussions, they declared that the plague was actually a ‘Natural Disease’ caused by ‘Hot Blood’ implying that ‘the bloody fluxes could overheat the brain, causing anger, rashness, and madness’. Response from the local authorities was bizarre and the cure they suggested turned out to be a disaster!

What the authorities did was, they suggested ‘more dancing’ in the hope that people would dance away their mania and return to their senses. They constructed a huge wooden stage and even hired musicians and professional dancers to keep the people encouraged and moving. Basically, they suggested fighting fire with fire. The plan, however, backfired and even more people joined the dancing group. It was only when many people started dying of heart attacks and exhaustion, the local authorities had to rethink their strategy and call the musicians and professional dancers off. After over a month of dancing in which hundreds of people died, the madness slowly pacified and then stopped as mysteriously as it had started!

Numerous theories have been proposed for the cause of this mysterious plague, including food poisoning, religious trances and mass hysteria due to the psychological stress of poverty, illness, and natural disasters that was pandemic in the country during that period. But again, they are just proposed theories. Nobody could answer with 100% certainty as to why hundreds of people suddenly decided to take to the street and dance themselves to death.

The dancing plague of 1518, however, wasn’t the only such bizarre dance incident in history. There are a number of other such incidents of dancing mania between 11th to 16th century A.D. But this one from Strasbourg is most baffling among all!